Steve Clarke has indicated that he is focused on helping Scotland qualify for Euro 2020 after taking up the managerial role which has been regarded as the career killer. Scotland have managed just three points from their opening two European qualifier games and this has put them in the back foot in terms of qualifying through the group with Russia and Belgian fancied to secure the top-two spots. 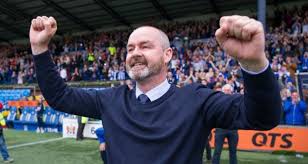 Speaking in a press conference, Clarke said that he is aware of the consequences of failure with the Scotland national side but he has nonetheless taken up the challenge to transform the club’s fortunes, he said: “I spoke to quite a lot of people in football who were telling me ‘don’t go, it can be a career killer’. Listen, I am happy to take it on, I am happy to have a go.

“I promise I will give 100 per cent for the country. We will try and be better than we have been and we will try and qualify. It is really important that we qualify out the group and don’t rely on the play-off games as a fall back as those games will be really difficult and will have a lot of pressure. It is really important we get out the group.”

Clarke recently helped Kilmarnock qualify for Europe after a period of 18 years and he was thereafter drafted in by Scotland to succeed Alex McLeish, who was sacked after just 12 matches in charge of the country. Scotland are scheduled to face Cyprus and Belgium during the forthcoming round of internationals and they need to get something against the latter to enhance their prospects of making the top two.

Otherwise, Scotland have the added incentive of a play-off to make the competition after they topped their Nations League group. Clarke’s team are most likely to face Finland during the one-leg playoff where they have the home advantage.